On Friday July 21st, 1882, the Northampton Mercury reported that Yardley Hastings beat Cogenhoe CC by 11 runs, it was the first reported match played by the village and the beginning of 135 years of village cricket. Those 135 years have produced some exciting matches, seen lifelong friendships borne and contributed to the sense of community you can only find in quintessential village England.

In 1982 Tim Street produced the superb club centenary booklet which was full of information about the early days of the club and contains some fascinating facts on how the club was run then which we can compare with today's running of the club. Tim's book along with a full club history compiled by Roy Quennell to mark 125 years of Cogenhoe Cricket Club are both held in the library at Lords.

In 1891 club membership was 2/6 which is about 25 pence, today it is £10, something our current Treasurer will no doubt be casting an eye over. In 1891 the club had two contributions from Vice-Presidents which totaled Twenty Three Shillings, today the club are superbly supported by over 40 Vice-Presidents and over 15 sponsors whose generosity every year means the club can continue not just to exist but grow.

The Club, at the end of the 2020 Season, parted ways with Cogenhoe United Football Club and has returned to our ancestral home at  the Village Hall Playing Fields cementing the club in the heart of the community. In early times the club has played at Billing Aquadrome, various fields around the village and before Compton Park the village playing field.

Up to 1968 Cogenhoe only competed in friendly fixtures, then under the guidance and driving force of David Welch, the club decided to lay a concrete wicket and join the town league. The club joined section three of the town league in 1968 and despite losing their first fixture away to Avon Cosmetics II at the Racecourse on April 27th, they bounced back the next week in some style against Y M C A \"B\" with David Bliss 129* and Terry Tarpley 76, sharing in a second wicket stand of 212, a club record that stood for 35 years. The season ended with the club finishing in second place and promotion to section two. Over the following years Cogenhoe were promoted and relegated on numerous occasions between the top three leagues before in 1998 seeking the challenge of the Northants Alliance League and then the Northants Cricket League, where they now play. A second XI was set up in 1976 and ran until 1981 in the town league. The seconds reappeared in 1992 and remained in the town league until 1998 when they too joined the Alliance and now also play in the NCL. Like many clubs Cogenhoe has had its shares of ups and downs but the strength of a village club like Cogenhoe is its history and tradition, we may not be the best cricket club in the county but we are one of the friendliest, who always try to play the game in the right manner win or lose. We have had a few famous names play for us as well as producing some excellent club cricketers whose talents would have been welcomed at a higher level but who chose to stay loyal to their village and their club.

Our most famous recent son is Mal Loye who played for the club as a teenager in the Eighties before going on to greater things with Northants, Lancashire and England. Peter Lee also of Northants and Lancashire played for the club in 1991/ 92 and helped the club to reach its highest ever town league finish in 1991 second behind the mighty United Social. Peter is also fondly remembered for his 5 wickets in 5 balls against Bugbrooke St Michaels in 1991. But for real cricket enthusiasts and historians our most famous ex-player was George Thompson who played for the club as a youngster in 1891 paying 1/6 on August 10th to become a junior member, before going on to far greater things with Northants and England in the early 1900's. The house in Station Road where George lived now proudly displays a plaque commemorating this fact, which was commissioned by the Cogenhoe & Whiston Heritage Society and funded by them, Tim Street and the club. At the unveiling ceremony kind words about George and our club were said by Mal Loye and Northants County cricket expert Andrew Radd. 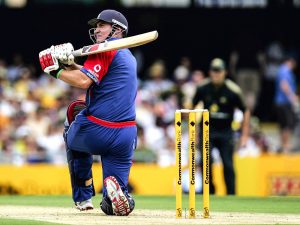 While those names may be known to cricket watchers, the strength of a village club like ours is the loyalty shown by players who have played for the club for years through thick and thin, from Les Robjohns, Bob Sketchley, Tim Street and Terry Tarpley in the sixties and seventies who were followed by Dave Foley, Albert Irons, Syd Mason, Pat Loye, Tot Manning, Jason Roberts, and Phil Whiteman. Dave Evans, Shaun Roberts, Paul Hargreaves, Leigh Woodward and Nobby Wykes through the eighties and nineties leading on to today and Dan McLaughlin, Gareth Goddard, Ryan Knight, Russ Coleman, Mark Bird and Jack Quennell. Today the club is as healthy as it has ever been. Two senior sides, frequent friendly trophy matches, All Stars and junior sides. The junior structure plays an important part in the clubs development while we do see some talented youngsters leave the club for the bright lights and better standard of cricket a larger club can provide, the youth system has and continues to produce some very talented cricketers for our club.

The club has enjoyed success both on and off the field of play in recent years and in 2021 the First team will play in Division 5 of the Northants Cricket League whilst the seconds will play in Division 10.  The previous decade has seen our club and our members recognised at a County and National level showing just how far we have come in a short space of time. In 2010 the club won the ground of the year award for Divisions 8 to 13, the second time we had won the award the last being in 2004. The club also won the Ian Davidson Memorial Trophy in 2010 for best publicity of a club via the media. This prestigious award was also won by our club in 2012 and 2016 in recognition of our superb Social Media work on this site and on Facebook and Twitter. A hat-trick of awards in 2010 saw Ashley Davis pick up the young bowler of the year award for Divisions 1 to 14. Ashley was just 14 years old and took 28 wickets for the seconds.

In October 2011, the club was awarded the ECB Clubmark becoming the 25th club in the NCL to become accredited. ECB Clubmark is an accreditation scheme for cricket clubs that demonstrates that a club is sustainable, well run and provides the right environment for its members. Clubmark accreditation also means our club is recognised as a safe, rewarding and fulfilling place for participants of all ages, as well as assuring parents and carers that they are choosing the right option for their young people. 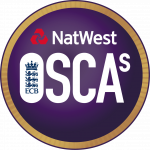 2016 saw the club receive a Northamptonshire OSCA for its work on NatWest Cricketforce day, but 2016 belonged to Matt Morrissey our Level 2 Youth Coach who was recognised by the ECB and short listed at the National OSCA Awards at Lords in the Coach of the Year category, whilst Matt was also short listed in the Community Coach of the Year at the Northamptonshire Sports Awards.

In 2019 Gareth Goddard became the first ever recipient of the Northamptonshire OSCA for All Stars Activator. Gareth’s profession as a teacher giving him the ideal credentials to deliver the All Stars sessions and this was deservedly recognised by Northants Recreational Cricket. In 2020 our former Chairman Roy Quennell was also recognised for his service to our club with a lifetime achievement OSCA.