It has been a very challenging year for our club, but ultimately a most successful one, which has seen us dealing with some unusual issues alongside the normal day to day things that running a grass roots Cricket club entails.

We began the year somewhat apprehensively and with fingers crossed, waiting for the green light on our move back to the Playing Fields. Once we signed the SLA with the Parish Council it was over to them and they were quite superb in organising the grants and installation of the new ‘Spike Pro’ pitch we now play on. Our village is very lucky to have a Parish Council whose focus is on getting the very best for our community and the Playing Fields has been transformed over this past year, we are more than happy to have played our part in that transformation.

There were some objections and fears raised on social media that our move to the Playing Fields would in some way be a takeover and that we would dominate the field to the detriment of other members of our village. This was soon proved not to be the case and we have more than proved our worth in helping to enhance the playing fields. I would like to thank Gareth Goddard and Paul Browning for their contribution in working with the Village Hall Committee during meetings. Also Paul Knight, Jack Quennell and Matt Morrissey for their time and dedication in maintaining and cutting the field to such a level that it has been noticed by many in our village and has helped quell any fears that were raised when we first returned to the Playing Fields.

With Covid regulations easing, we have managed to hold one face to face committee meeting and once again my thanks to everyone on the committee for your support. Lynsey McIntosh has once again been magnificent, not only in putting up with all my phone calls, but also single handedly getting us two substantial grants in a season that has seen our expenditure soar. This was to be expected this year with more to come next year as we look to further improve the facility we now enjoy. Also my thanks go to Malcolm Browning and Charlie Bryant who have both decided to step down after over 10 and 15 years respectively. Their efforts over the years have been exemplary but in their own words they both feel the time is right to let younger members of the committee take more of a leading role. They have both reiterated the fact that they will still be greatly involved with the club and will support in any way they can going forward.

Our finances are of course helped by your fantastic response to the Members club, which when we started in 2020 had 29 members. The year this has risen to 41, giving us confidence to make investments for our club which will stand us in good stead for many years to come. Thank you to you all.

On the field it has been a very encouraging season too with another successful ‘All-Stars’ campaign run by Lynsey and ably assisted by Lilly Smith, Niamh Garratt and Matt Irons, whose contributions saw Lilly and Niamh recognised by our County, being awarded the Northamptonshire OSCA for young volunteers, a superb accolade and fully deserved by both of them. Gareth Goddard ran a very well attended U9’s section for those too old for ‘All-Stars’ and along with Ben Garratt ran the Earls Barton under 15’s that contained more than a few of our village youngsters. These age groups are vital for the future of our club and in Gareth, Lynsey and Ben we are lucky to have coaches whose love of the game is transmitted to the youngsters they are coaching. My thanks to you all and all those who have assisted you throughout the year, as well as the parents and players who have also given their time on Tuesday evenings.

For the first time in our clubs history we entered an U17’s side into league cricket and what a first season it has been as Matt Morrissey’s charges finished as runners up in both the league and league cup. Even more remarkable is the fact that it was actually an under 16’s side and we were competing with big clubs such as Finedon, ONs and Oundle to name just a few. The Thursday evening cricket proved to be very popular within the village and it was so nice to hear the positive comments about the under 17s. Congratulations to Matt and all those young men who represented our club with such distinction this summer….well played!

The First Team continued to please and frustrate in equal measure, capable of some sublime cricket one week, only to undo all the good work the next. A decent 4th place league finish was achieved, but it could have been so much better. Henry had another great year with the bat, whilst Darren came so close to setting a new club record for the highest individual score with his 160* against Irthlingborough 2nds. Nick was again bagging 30 plus wickets, taking him past the 400 mark for the Cooks.

The Second Team had a cracking year, also finishing in 4th place but then going on to win the Division 10 KO Cup with a very accomplished 7 wicket win over Harlestone last month. Ben has had a stand out summer with the bat, scoring a record breaking number of runs for the seconds with Alex, his partner in crime also having a great season with the bat, the two of them giving the Twos innings a great platform. Mark, Adam, Frankie and the ever dependable Syd, formed a formidable bowling attack and skipper Russ must have been so pleased with the attitude of the lads throughout the season.

We were once again lucky to have the dedication and time of Alan and Charlie as we completed yet another season having supplied an umpire for all our matches, with Charlie also turning out for the under 17s matches. The umpiring ranks may be further bolstered next year by the addition of Matt Irons now that he has decided to hang up his spikes after one injury too many. In a time when volunteers are hard to come by, Alan and Charlie are like gold dust and we are very fortunate to have them at our club. The same can also be said about Lynsey, who I have mentioned before once or twice! On Saturdays Lynsey was the 1st team scorer and cake supplier and I think we all know which job the lads would have Lynsey do full time!

The scoring ranks have also been bolstered this year with Jonty taking an interest in scoring for the seconds, something he has done at times this year.

I am extremely proud and honoured to be the Chairman of this great club, my village club. Each and every one of you has helped us to have a fantastic first year in our new home. My thanks to you all and I hope you have a great evening! 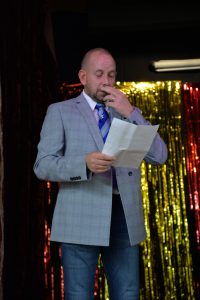