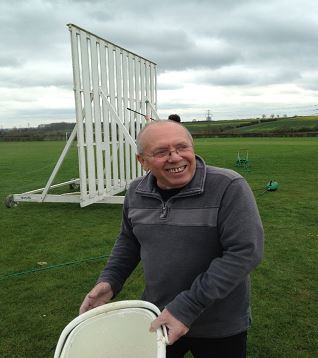 It is with great shock and sadness we were informed of the sudden passing of Keith Parsons.

Keith joined Cogenhoe back in 2005 and his involvement was down to Phil Whiteman. Phil was a manager at DHL Homebase whilst Keith was a union representative. From a work perspective the two shared many a tussle during disciplinary hearings but always got on well outside of those meetings, sharing a similar philosophy on life and a love of sport. Phil managed to get Keith to join our club and Keith made his Cooks debut aged 55 on April 30th 2005 for the seconds in a cracking 3 wicket win over Obelisk first team. Sadly Keith did not trouble the scorers on that occasion but he went on to make 120 appearances for Cogenhoe many of which were as a wicket keeper and he took 60 catches and 5 stumpings.

Keith`s highest score was 34 not out in a losing cause against Wellingborough OG`s III`s and overall he scored 530 runs for Cogenhoe not bad considering he spent most of the time batting in the tail end. In 2013 most of the first team decided to get married in the summer which also coincided with the first team playing in Division 5 the highest league our club had played in. A weekly player shortage and a broken thumb for our regular first team keeper saw us ask Keith if he would step up into the first team to help us out. So at 63 Keith made his first team debut against Isham and played 8 times in all. After one game Keith said to me that keeping to Syd and Tony for the seconds was lovely, but when he kept for the first team to Alex and Jason his hands used to ache until Tuesday.

Pic: Keith with the Second XI

But Keith never let the club down despite his own self-criticism he was a good keeper who despite his age pulled off some stunning catches and stops behind the timbers. During a first team game over at Badby I found myself in a last wicket partnership with Keith. The hosts had posted 216 and we were 130-9 in reply after 43 overs. 3 overs and 18 runs later the fielding side were starting to get a bit edgy as we only needed to hold out for a few more overs for the draw. At the end of the over Keith and I met in the middle. “Their getting a bit nervous of us mate” I said “and so they should be” replied Keith with a cheeky grin, sadly 3 balls later I was out. 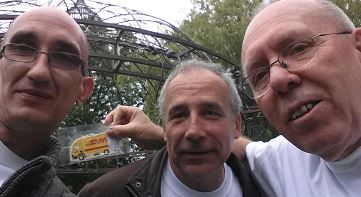 Pic: Keith with Dave and Richie

Keith was also a quite brilliant salesman when it came to the Pints Make Prizes fundraiser that Phil organised and that was supported by our club. Keith won the prize for best salesman in PMP first year selling over £100 worth of raffle tickets , by PMP 4 Keith was selling over £250 worth and regularly meeting up with Phil and Dave Foley for a coffee in Starbucks for a chat and more tickets. Keith also entered into the spirit of the whole event by entering a team in the PMP Challenge day. His team Brackmills Old Boys was made up of colleagues Dave Koster and Richie Barret from his Homebase days. They completed many of the challenges and finished a creditable 6 th out of 13 teams that ended up at the Falcon Pub in Bletsoe.

Keith was a real clubman indeed only last week I received his 350 draw tickets one in the name of his sister Carmel, one for Will Bullard, 2 simply had KP on them and as usual he brought one in the name of the SMA Charity. Keith was always very supportive of the club`s fundraising and charitable events and regularly attended our social functions. Keith was also only too willing to roll up his sleeves and get stuck in when we held our pre- season cricketforce days where we get our ground and facilities ready for the season ahead.

On behalf of our club may I send our deepest condolences to Keith`s sisters Christine and Carmel and all of their families. Keith was one of life`s gentlemen and he will be sorely missed by all of us at Cogenhoe Cricket Club who had the pleasure of knowing him.