It is with great sadness that we learned today that Jim Dorr has passed away.

Jim played for Cogenhoe from the early 1970`s until 1982 and he was a very popular member of our club. Jim made his league debut for Cogenhoe on May 29 th 1971 against St Michaels in a Town League Division 2 fixture on Pitch No 6 at the Racecourse. That first league game saw him open with Bob Sketchley but the following week against Primrose Hill Jim opened with Les Robjohns. A partnership of 80 for that first wicket before Les was out for 55 was the beginning of a most fruitful and long lasting batting partnership. Jim went on to score 70 in that game. Jim and Les really did compliment either other Les was a right handed batsman who could take any attack apart whilst Jim was a typical lefty, classy looking with that effortless quality giving the appearance that it was all so natural. Jim made 112 league appearances for Cogenhoe scoring 1222 runs with his highest score being 87 against Avon in July 176 when he helped Cogenhoe chase down 196 for victory, incidentally current Cogenhoe player and club official Dave Patrick was in the Avon side that day.

Jim`s last league game for Cogenhoe was against Prims on September 4 th 1982 and saw him open with Pat Loye, but when Pat was out Jim was joined at the crease by his old partner Les a fitting end to his playing days.

Jim never forgot his Cogenhoe links and was always willing to don the white coat and help us out with a bit of umpiring in the days after he finished playing, indeed Jim was still helping us out at the start of the millennium.

Jim`s funeral is on Tuesday 20 th June at Broughton Church (near Kettering) at 12.00 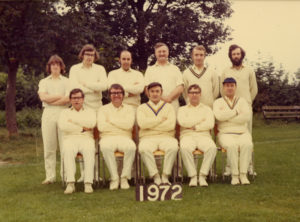