After the season-low showing against Horton House two weeks ago, the U13s travelled to Saints looking to put in an improved all-round performance against a Saints team littered with their developmental/squad players to keep the game [hopefully] competitive.

Saints came out to bat with intent and with a quick outfield, it meant that the Cooks had to field with real purpose to restrict the score. Prashil opened the bowling and immediately struck with a Barnes-Wallis special, which was a borderline 3rd bouncer, but it was given and the score was 2-1. Fellow opener Jake then followed that up and removed the other Saint’s opener third ball with a cracker that hit the top of middle peg and Saints were 8-2 and the team’s confidence was going through the roof.

What followed was the best fielding and bowling stint of the year, as the whole team put in a fantastic shift to keep Saints to 104-7 from their 20 overs. There were so many highlights; there were additional wickets for Niamh, Aidan, George and Mohit, plus Jacob with a direct run out with catches from Liam and Jake. Will and George were superb in the outfield, really getting behind the ball and Mikey was brave behind the stumps.

At the break, the coaches were so proud of them all, with comments from supporters on both sides commending their fielding and more importantly, how they all seemed to have enjoyed it with big smiles on their faces. The instruction for the batsmen was go out and enjoy yourselves, be positive, good calling and have a swing!

George and Liam set off for what we hoped would be a good 20+ stand…which quickly saw us 1-2 as both openers were back in the hutch, with minimal foot movement [or concrete boots!] the reason for their downfall. The bar was open and doing a roaring business….

However, Jake then steadied the ship with first Mohit and then Prashil and got us ticking along to 30-4. Mohit had a positive swing but missed a straight one, as did Prashil after some nice shots that couldn’t pierce the infielders.

Aidan then joined Jake and the pair batted excellently together, Jake hitting six boundaries in an unbeaten 29no [retired not out] and Aidan playing – without doubt – the best innings of his short career, ending 14no. I don’t think anyone would dispute Aidan has a range of shots, but it all came together last night, which was fantastic to see. The challenge is now to take that into the next game, with the confidence he must have gained.

The innings ended with some nice shots from Will for none, but the intent was there and the final score of 64-6 left us 40 runs short. That was not an issue, as the performance was the only thing that mattered and they were all brilliant.

The final thing to say was thanks to Saint’s coaches for agreeing to rest a few of their County and District players to make the game and also for their hospitality, as tea was provided to both sets of players, and I reckon we definitely held our own in the pie-eating stakes! 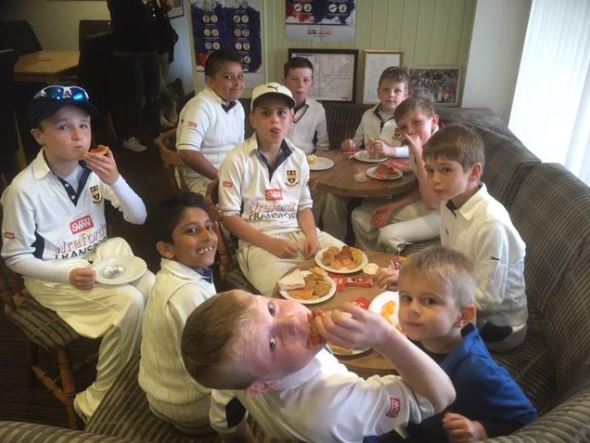 Thanks to Charlie for umpiring and Ben and George for scoring and all of the fantastic support from parents. Can we please keep it like this every week?